These guys may seem like a regular bunch of cute bunnies, and during daylight that’s exactly what they are. But as the night falls, a peculiar trait reveals itself occurs — the rabbits start glowing in the dark! 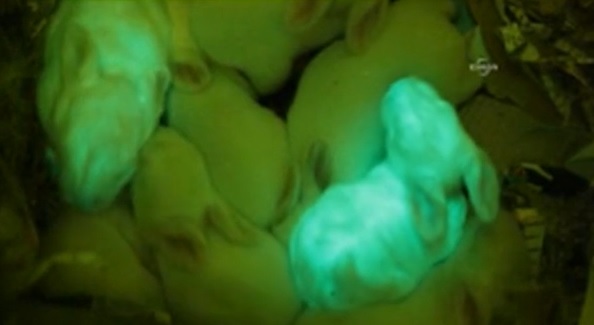 “So how can a pack of small rabbits emit glowing green light?” you might ask. Well, the bunnies are the result of University of Istanbul scientific research that fused the little fellows with jellyfish by injecting them with a specific gene for glowing protein production.

The protein is invisible during the day, but radiates at night. Speaking to the LA Times, associate professor Stefan Moisyadi noted that the gene is harmless to rabbits, but will be passed down to their offspring.

“Our main plan was to do sheep, but they only have one or two embryos max,” Moisyadi stated. “Right now we have 10 pregnant sheep, and we hope that 25 percent of the babies glow green — maybe two or three of them.”

The professor also stressed that the entire process isn’t about entertainment, as it can also be used for the insertion of proteins used in medications.

“Animals can make valuable proteins in their milk that humans use for medicine, and you can extract the proteins quite easily,” he explained. “It would make certain pharmaceutical production extremely cost-effective.”

The project raises a numerous number of ethical and moral questions but also holds great promise and potential. Watch video of the glowing bunnies below, where it is embedded for easy reference:

On a related note, how does the idea of glowing bunny slippers sound to you?