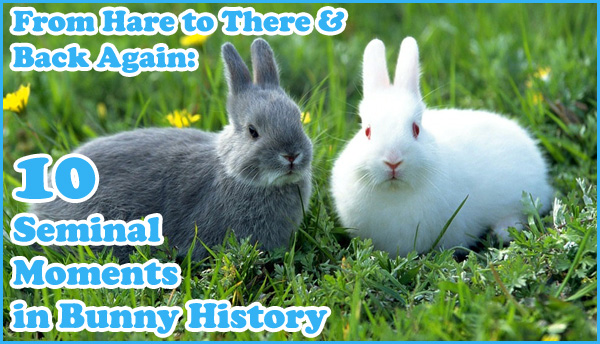 Arguably the most iconic rabbit ever, Bugs Bunny was created by a team of animators at Leon Schlesinger Productions, which would later be brought under the Warner Bros. umbrella in 1944. An early prototype of the character debuted in 1938; a revised figure, complete with signature handle, voice, carrot and catchphrase — “What’s up, Doc?” — would emerge two years later in the short, “A Wild Hare” (watch it below).

The character’s flippant attitude towards authority figures resonated with audiences (kids and adults, alike) in the period after WWII, fueling his popularity as well as that of the serial program on which he appeared, Looney Tunes. As a result, Bugs was subsequently repositioned as the official mascot for the show and Warner Bros. at large.

Said to be modeled (in appearance and youthful temperament) after Peter Rabbit, Thumper was introduced to audiences in 1942’s Bambi, one of Disney’s earliest and most beloved animated films. Along with a skunk, Flower, Thumper serves as Bambi’s savvy sidekick, friend and mentor, learning him in the ways of forest life. He also acts as the film’s moral compass, at one point invoking the Golden Rule: “If you can’t say something nice, don’t say nothing at all”.

A 1950 film based on Mary Chase’s play of the same name, Harvey features James Stewart as Elwood P. Dowd, a good natured (if somewhat eccentric) individual whose best friend is an 6’3.5″ tall rabbit (the titular character) that is invisible to all but Dowd himself. (As described by the lead, Harvey “is a pooka, a benign but mischievous creature from Celtic mythology.”) Dowd’s attempts to rationalize and share his imaginary friendship leads to an uneasy tension with his close family members, wary as they are of the scrutiny this brings in polite society. Dowd’s obsession with Harvey, diagnosed here as a by-product of his (admitted) propensity to drink or alternatively, mental illness, is resolved to surprising effect during the film’s conclusion.

Harvey, being that tall would need to get our mens fuzzy slippers.

THE PLAYBOY BUNNY LOGO IS INTRODUCED (1954)

The first issue of Playboy was published in the December of 1953. Its founder and editor, a then 27-year old Hugh Heffner, had originally planned on calling it “Stag Party,” but was forced to reconsider when Stag magazine threatened litigation. As a result, he had to scrap an illustrated mascot that his cartoonist Arv Miller team had previously developed (pictured below on the left). The design was subsequently retrofitted in the form of a rabbit (also pictured below, right frame).

The Bunny concept was subsequently transformed once more by Hefner’s creative director, Arthur Paul, into the iconic silhouette pictured below. It was added to the magazine’s second issue and has been a part of every publication since (amazing, unaltered at that).

As Hefner would later explain it, the rabbit-cum-bow tie was selected for its “humorous sexual connotation” and “frisky and playful” qualities, which perfectly complimented the brand and its stated purview.

A staple of high school and college lit. syllabuses for more than 4 decades now, Watership Down tells the story of a clutch of small rabbits that must venture across the English countryside in search of a better, more stable habitat. The rabbits, possessing their own language and history, battle predators, humans and other rabbits along the way. The mix of peril and temptation evokes allusions to Homer’s epic poems, and World War II which is not coincidental: the author, Richard Adams, served with the British armed forces between 1940 and 1946.

The book was later adapted into an equally beloved animated film (1978), from which a cell can be seen below.

THE VW RABBIT HOPS OFF THE ASSEMBLY LINE (1974)

In an effort to fend off the increasing market share of Japanese automakers and their smaller, energy efficient automobiles, Volkswagen designed and manufactured the Rabbit as a replacement for its iconic Beetle. The car’s distinctive, box-like appearance (reinforced by square headlights that were added to later models), superior fuel economy (up to 45 mpg in the city and 57 mpg on the highway), and American construction (the first foreign auto to be manufactured Stateside) won it a dedicated following, especially as the oil crisis of 1979 unfolded.

Between 1978 and 1988 (when the car was discontinued in favor of the Golf), Volkswagen sold nearly 1.2 million Rabbits, and they remain, even today, popular with car collectors and VW enthusiasts.

One more for the road:

The star of more than 115 television commercials to date, the Energizer Bunny is known for his signature wayfarers, flip-flops (eh, flip-hops), and the bass drum (branded, naturally, with the likeness of an Energizer battery) he carries on his chest. A testament to the power of repetition (both literally and figuratively), he has become synonymous with durability and trustworthiness, as have the products he pitches.

Proxy for something that can continue on indefinitely, the Energizer Bunny is typically cast directly against a product or toy using a competitor’s battery, which inevitably expire and fail, or pitted against a villain or foil that grow increasingly exasperated and unable to match his endurance. The following clip, starring Darth Vader, no less, neatly illustrates the approach.

Meet Toto, one of Youtube’s earliest viral stars. In this adorable clip, he opens an envelope for his keeper, munching on cue along the edge. To date, it has racked up more than 2.8 million views and spawned dozens of copy cat videos.

When we launched our humble little enterprise in 2007, we did so with a total of 3 products (Killer Rabbits, Godzilla paw feet, and the Classic Bunnies pictured below) and a simple mission to deliver quality products, superior customer service, and low prices. In the years since, we’ve added more than 100 styles to our catalog and outgrown two order fulfillment stations in the process; the commitment to quality, however, remains the same!

We have so many more slippers now, check our our kids dinosaur slippers