Have A Cat-uccino: Cat Cafes Around The World

Sorry dogs, but the cats are taking over the world right now. Darlings of the internet (please see: Grumpy Cat, Lil Bub, and friends), cats are now beginning to integrate themselves into every facet of our lives. First came our homes, then our Internet, and now they’re taking over our coffee shops. 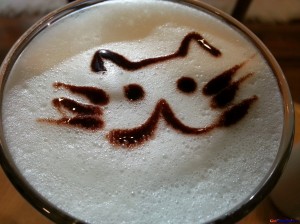 Fortunately, our coffee is still decidedly (mostly) cat free. (via Got Bangkok)

The first cat cafe opened in 1998 in Taiwan, but the business model first rose to prominence in Japan: because housing space is so limited in Japanese cities, keeping pets is difficult. Tokyo alone is home to hundreds of cat cafes, and the craze is spreading around the world. (We told you.)

Aside from a temporary pop-up cat cafe in New York City, the United States is still waiting for the opening of its first cafe, though establishments in Oakland, San Francisco, and Portland, Oregon are due to open later this year.

Here’s a look at some of the cat cafes around the world that are spreading purrs and snuggles one cup of coffee at a time. 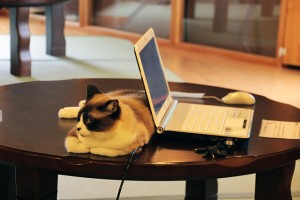 Cats, coffee, and computers: match made in heaven. (via Travelocafe)

Residents of Quebec are eagerly awaiting the upcoming opening of the Café Chat L’Heureux, where they will be able to meet and hang out with 8 cats adopted from local shelters. The Montreal cafe is scheduled to officially open this summer. 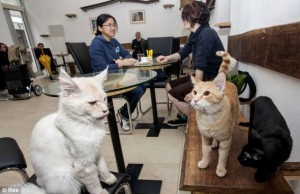 Ooh la la! These friendly Parisian café resident cats were adopted from animal welfare groups, giving them a life off the streets. Their new home is comfy and cozy, with lots of yummy treats and drinks for their human friends.

In London, you can take your tea with the cats at Lady Dinah’s Cat Emporium. Eleven rescued cats wander amongst patrons in this quiet two floor cafe in the Shoreditch neighborhood.

The Cat Cafe Budapest not only features delicious food and drinks and adorable cats, but many excellent events as well, like adoption days and birthdays. Spending your birthday with coffee and cats? Sounds good to us! 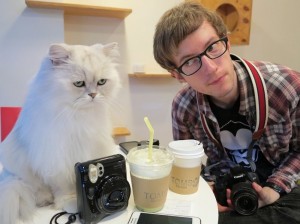 Bonding over coffee and a common love for photography. (via Daily Coffee News)

The Dubai Cat Cafe sounds pretty fantastic: not only do they have a nice cafe, they also feature a “cat therapy” hall where their 20 resident cats roam freely and socialize with customers.

Tokyo’s largest cat cafe hosts over 50 cats in a roomy building— they occupy two floors in their Shinjuku location!

Cat Cafe Nekobayaka is Japan’s first black cat-only cat cafe. All of their resident cats are black all over; the other non-black cats of Nekobayaka live at a different branch of the cafe. What a great place to spend Halloween! 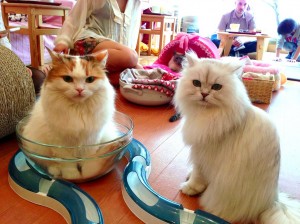 Don’t worry— the cats have plenty of seating. Like in this bowl. (via Smithsonian)

Newly opened, the Cat Cafe Melbourne is home to 11 rescue cats. These lucky felines have multiple rooms to hang out in with big windows—for maximum sunbathing, of course!