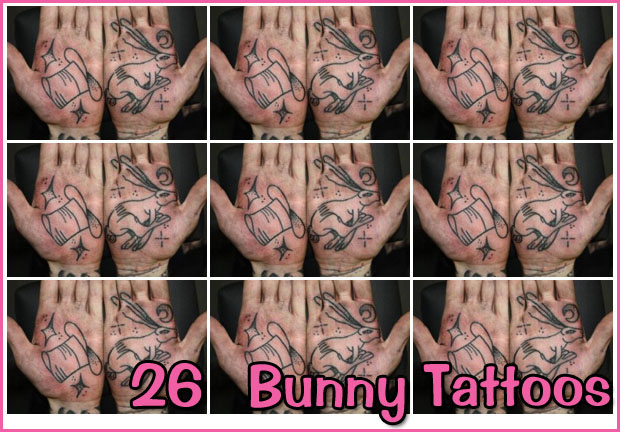 2. This shoulder piece was listed in All Fun 24’s list of rabbit tattoo designs. It’s sweet with out being cutesy, austere without being pretentious – perfectly walking all the lines that make a tattoo perfect.

4. Sometimes you need a Dissapproving Rabbit (RIP) to keep you in check. We found this Guen Douglas piece on the Eff Yeah, Tattoos! Tumblr, and it was love at first disdainful glare.

5. This tattoo is devastatingly cool, as in “I’m so devastated that I’m not as cool as your cool tattoo.” Seriously. I don’t dare make a pun about this piece by London tattooist Lyam Sparkles for fear that the image would leap out of my computer screen and smirk scornfully at my utter lack of style and design acumen.

6. “And now, for my next trick, I will explain how any of these finger tattoos are relevant to one another!” But just because I’m in the dark about how a rabbit with a carrot, some sparkles, a steer, a chess piece, a cog and a paw print all come together, that doesn’t make these tattoos we found on Rate My Ink any less charming.

8. The colors on this rabbit tattoo – spotted at Of Tattoo – are incredible.

9. The owner of this tattoo – inked by Sodapop at Ink Spot Tattoo – wrote to Eff Yeah, Tattoos! citing Pink Floyd and his “own journey to finding meaning/motivation” as the inspiration for this cheerful piece.

10. This is the most humane way to catch a rabbit I’ve ever seen. So, kudos to this lovely Tumblr-er.

11. “I’m as happy as a rabbit in a field of lettuce.” That’s a pleasant sentiment to immortalize on your upper arm, certainly. (Spotted @ Animal Tattoos).

12. Here we have two minimal approaches to rabbit ink: first from Stace Hurst…

13. … and this one from a member of the Rabbits Online forum expressing her support for rescuing rabbits.

14. Here are two just mind-blowingly incredible tattoos by Bailey Robinson at The Fabled White Buffalo Co. The first, I assume, is a visual exploration on the interplay of good and evil in an individual.

15. Though the symbolism is less clear in this piece, the work is no less breathtaking.

16. A personal fave, the source for the header image above, and THE classic trick by which magicians are measured.

Total chaos, no mass confusion /
Rhymes so hyponotizing known to cause an illusion /
Like a magician who draws a rabbit out of a hat, son /
I’m drawing more, like a .44 magnum /

But wait, there’s more! Our original entries, 10 in total, are embedded below…

17. The Velveteen Rabbit – classic! Apparently, this tattoo is unfinished. Imagine how good it will look when it’s completely colored in.

18. Tea time is all the time with this little bunny on your arm.

19. The zombie bunny ghost of Mr. Rogers? A handsy grandfather rabbit coming in for hug? ‘Not quite sure what this person was going for, but whatever it’s meant to be, ’tis pretty neat.

21. This Chinese zodiac rabbit tattoo symbolizes the wearer’s kindness, artistic taste, and good sense. Her ability to pull off a purple bikini probably has little to do with her Chinese zodiac, but is commendable nonetheless.

22. For cute junkies, just browsing Cute Overload a few times a day isn’t enough! These fiends jones for the ultimate fix – getting a highly visible tattoo of two adorable animals in a friendly embrace.

23. More wisdom and menace than fluffy tails and pink noses, this isn’t your typical bunny tattoo. Sure – it’s the year of the Rabbit, but it’s also 2011. We’re playing by our own rules.

24. A list of rabbit tattoos simply wouldn’t be complete without at least one old school Bugs Bunny tattoo.

25. The white rabbit appeared first in Lewis Carroll’s Alice’s Adventures in Wonderland, but the wearer of this vivid, colorful tattoo chose to get it after seeing The Matrix. Follow the white rabbit – you never know where he will take you.

Note that it differs from the rabbit tat that’s actually featured in The Matrix.

26. This tattoo is the antithesis of the Looney Tunes tattoos middle age men. When this wearer was hit with a bout of nostalgia, it manifested itself in an adorable tribute to another classic literary bunny, Beatrix Potter’s Peter Rabbit.

The only thing that would make these tattoos better is pairing them with Classic Bunny Slippers.

Do you have a rabbit tattoo you’re dying to share with the world? Let us be your vessel to a modest bit of Internet notoriety! Email us your tats: sarah [at] venderagroup.com